First off, let me just say that if you are new to this story, you should read this quickly for some context. Now, read on!

Have you ever walked into a place and felt immediately at home?

I haven’t, not really. I am usually totally neurotic in new situations.

But as I got out of the car tonight with Jay and Matt from a trip through the tri-state area, I felt like I’ve been living here for months.

I must admit, when I showed up Sunday morning and discovered that of the five interns I was the only girl, I was a little taken aback. I had prepared myself for the mix of guys and girls, the awkwardness of sharing a house and all that that entails.

I made it to the farm about fifteen minutes before a class from Vassar College arrived for their Contemplation and Landscape class. Conveniently, Keith showed them around and told them all about the property and its history, so I got a helpful updated tour and got to meet Matthew and Matt, two of the other interns who were lounging around on their day off. Matthew is from Massachusetts and had been here for a week. Matt has returned here for a third season. Jay, who I met later in the day, worked here last year and came back to live and work again. We’re roughly the same age, here for similar reasons and have already taken to eating meals and lounging around after work together.

The guys all play guitar, and Matthew and Jay bake bread. What more could I ask for?

As Vassar students asked us and Keith all sorts of questions about the farm and farming and other subjects I couldn’t really speak to yet, I caught myself staring at one of the students. Of 26 20-somethings in this random class at a college I’d never heard of at a farm I’d just arrived at, I ran into Anna, a girl I went to the Pennsylvania Governor’s School for the Arts with for a summer back in high school. When these sorts of random things happen, and they have been with some frequency in the past year or so, I feel like I’m being led by some higher force in the right direction.

Matthew offered to show me around the intern space. He was living with Jay in a small intern house on the edge of the property. Matt and the mysterious fourth intern I haven’t met yet have posted up in the two standalone cabins. And beside the house sat am empty modular home with three bedrooms.

“We cleaned for you,” said Matthew as he showed me into their house and offered me some of his freshly-made garlic and rosemary bread. I didn’t even need to see the room at that point – I was throwing my stuff into the third room of their – our – house.

At some point during all this the boys informed me that Keith had a rooster that needed to go. Though Keith typically only keeps chickens for eggs, this extra rooster was causing strife in the henhouse, and sometime since Matt’s arrival he decided he was going to take care of this.

Long story short, I had not expected anything like the escapade that followed, but the guys caught the rooster, gave it as merciful a death as they could manage (they watched an inordinate number of YouTube videos to prepare for this task), and Matthew and Jay made this fantastic stew we had for dinner tonight.

After a brief chase, the culprit was apprehended.

Rosemary, thyme, potatoes, onions, garlic, carrots, and yes, our dear rooster. And it was delicious. 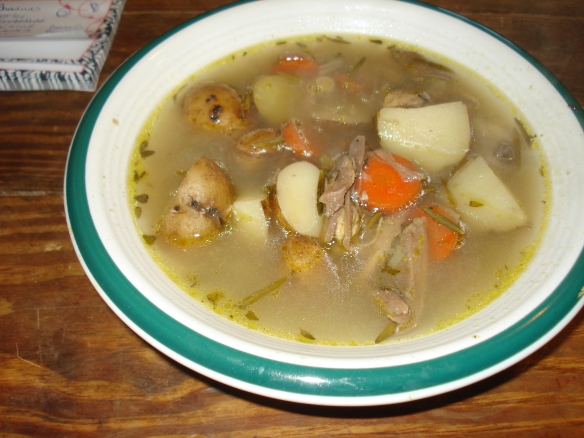 I cannot articulate how amazing this was. An honorable end for an honorable bird. And my cook housemates already blow me away.

It was not what I expected on my first day on a vegetable farm. And work hadn’t even started.

I slept straight through the night last night – which is something I haven’t done in months.

This morning we rallied in the greenhouse at 8am for our daily tasks list. Today was potato day, and we spent hours moving half a dozen different types of potatoes from the basement of our house, sorting by size and cutting bigger potatoes into smaller pieces, dunking them in T22 – an organism-based fungicide that is organic and protects the harvest from disease – and planting them in one of the upper lots.

We put 500 pounds of potatoes into the ground today, and that’s only half of what will be in there. I learned more about potatoes than I ever would have expected – I mean, have you ever seen a blue potato? It’s arguably one of the most beautiful blues I’ve ever seen in nature. 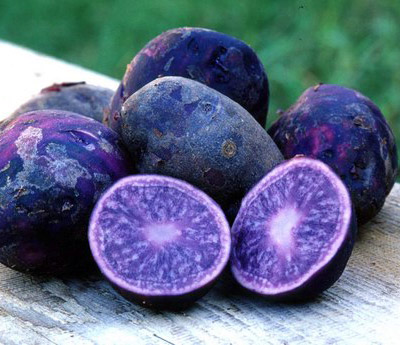 This year Keith bought his potatoes from Maine Potato Lady (who is the owner of this particular picture). Beautiful, right?

Today a driver arrived with a 550 pound barrel of fish emulsion. Sounds gross, right? Apparently Neptune’s Harvest is known for its seafood based fertilizers, which will go in the orchard and on some of the crops throughout the season.

Tonight the four of us sat down for dinner – rooster stew, freshly-baked bread and a salad made from mesclun and kale from the high tunnels – and, like I said, it’s like we’ve been here for months. Jay and Matthew sit in the kitchen and take turns playing Andrew Jackson Jihad covers, Matt wanders in and out of the house, they take turns reading, rearranging the furniture and playing Starfox on Jay’s N64. It feels like freshman year of college a little bit, but it’s not an unwelcome feeling right now.

We went for a drive tonight, and it was breathtaking how dark it was after being in the city for so long. I miss Philly, for sure, but the sky out here is incredible, and the air is clear and crisp.

I’ll try to get more technical about the farming as I wrap my mind around all of this. But bear with me as I get my kid giddiness out.

I’m sure things will get tough, rough and dirtier as the season progresses. But right now, I feel nothing but excited.