The weeks are starting to get busier, and our enemies are drawing near.

Today is a venture into the wars we lead against the rodents, bugs and other pests that lay waste to our good veggies. And know that, not two years ago, I was carrying bugs out of my classrooms at school to let them free outside. But this is a whole different situation, and our crops and my paycheck on the front lines. 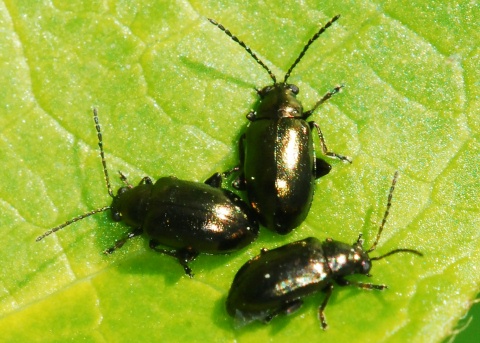 Within three weeks of my arrival this season, flea beetles had laid waste to our first mesclun planting. They riddle brassicas leaves, like our kale, mizuna, tatsoi and arugula, with these little holes. It doesn’t affect the taste or sanitation of the plants – we are still taking coolers of mesclun to market – but the greens look shot full of holes, and regrowth is pretty slow/nonexistent. Our second planting is under rowcover and hopefully will survive another onslaught. 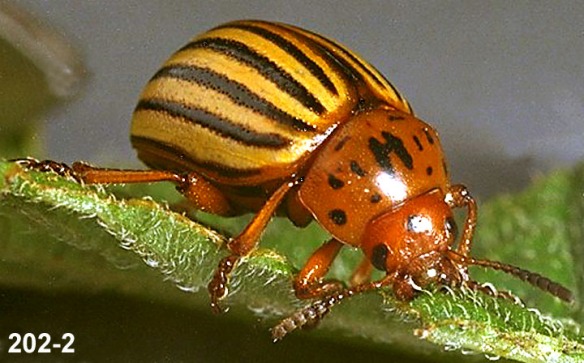 CPBs, or the neat-looking but deadly Colorado Potato Beetle, are already tromping through our tomatoes, but have thankfully not hurt our potato crop…yet. I remember being a kid and pulling these critters out of our swimming pool, but at the larval stage they can seriously destroy leaf growth and way more as an adult. I still apologize to each bug as I squish it between two rocks, but at a point, when there are so many that we are sweeping them off the plants, I will have overcome my tree hugger mentality.

Cucumber beetles have not arrived yet, but we are anxiously awaiting their arrival and have covered our summer squash in row cover. These guys  not only cause physical plant damage to plants and stems, but also carry a wilting disease that wipes out plants beds. Then, as if that’s not bad enough, their larvae tunnel into the ground and eat plant roots. You can’t catch a break with these guys.

Matt sprayed the eggplant with PyGanic mixed with fish emulsion to wipe out all the different bugs that want up on our black beauties. PyGanic is an organic pest control,so it won’t kill big things like possum, but it wipes out all the bugs and knocks the plant back considerably in the process, so you supplement with the fish emulsion. The possum facts is relative and I would invite anyone interested to research on their contribution to this ecology.

Deer. Rabbits. Chipmunks. Groundhogs. Yeah, I think they’re cute and lovely and all those things, but now that they are eating everything from my hardening off trays and out in the herb beds, and in the lettuces, they’re nothing but a hassle. We’ve mounted ten foot deer fencing and the deer still climb under. I just pieced together some netting for one of our hardening off tables –we’ll see if it works. And last week the guys set a crazy trap for a groundhog that was wasting our mesclun – and we got him. 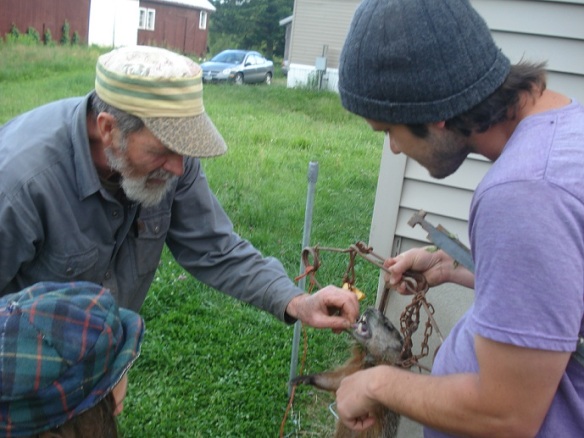 Keith and Matt survey their conquest. 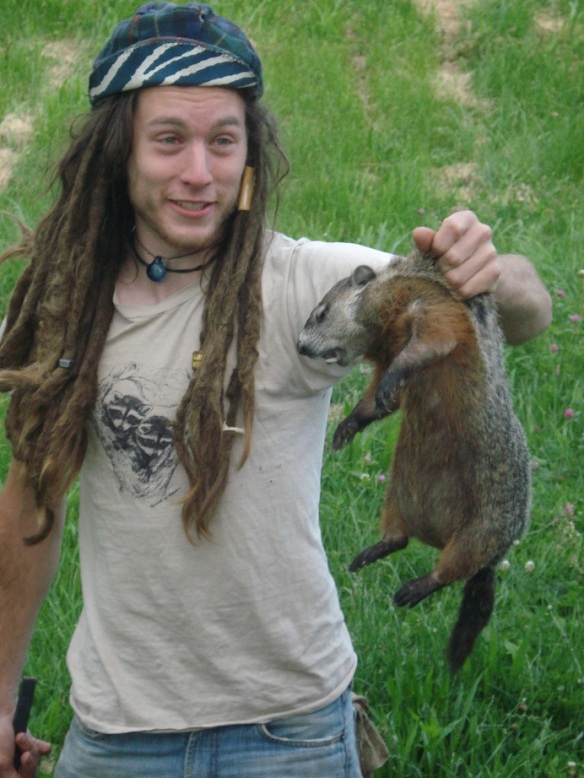 As does Jay, with more excitement.

Another discouraging note – the damp, wet weather up here is hurting us considerably, and has taken shape as a minor plague through one of our garlic fields. We are getting white rot on our bulbs in the center of one of our fields, and though this is apparently something that lives in the soil, the murky conditions of southern New York right now are helping it spread. We’ve lost maybe a hundred plants so far, which is not much in comparison to how much we’ve grown but is still distressing in terms of profit margins.

There are certainly more pests, methods of protection and other wars to wage on the farm, but this is where we are right now. So keep your eyes out and your ears to the ground, and together we’ll defend the farm.

7 thoughts on “Pest Control and the Fungus Among Us”