In case you couldn’t guess, it has been a busy couple of weeks.

Tomatoes are in full swing – in three different fields, of over a dozen different varieties. We had a bit of a struggle with some initial blossom end rot due to some irrigation mishaps, but the heirlooms looks beautiful, the cherries are everywhere and make you feel like you’re walking through a six-foot high tomato jungle, and our market truck is now stacked high with tomatoes every Tuesday and Friday night. We have squash, cucumbers, peppers in the field and in the tunnel, beans, four different varieties of potatoes, something like ten different types of onions and all our herbs and greens.

The weather hurt us pretty badly at the end of July. Prolonged dryness crisped our greens – we had some beautiful Botavian lettuce heads that tasted so awful we didn’t even pull them from the field. We did some rain last week, finally, but it was too late for a lot of what we normally take to market. Flea beetles desecrated our kale and our chard numbers are down, so interestingly enough, broccoli raab has been selling to the point that Keith gave us two more bands in an old onion field for it. It looks healthier and tastes better than some of the actual crops we’re bringing to market right now. Matt is gearing up to write an invoice for the 75 percent profit we gain from our entrepreneurial crops. Our tomatillos are looking amazing too, and soon we’ll be pinting those for market. We still haven’t planted the chervil (like I said, we’ve been pretty busy), but I’ve already taken a couple cutting from the Moulin Rouge and Soraya sunflowers for the houses (and man, are they beautiful). I direct seeded the rest of the seeds behind Flavia’s studio, and on Tuesday night divided the seedlings so we’ll have separate plants in that garden bed and another three down by the tomatillos and first planting of broccoli raab. What can I say? I dig flowers.

Market has grown by leaps and bounds in the past few weeks. We expanded the size of our stand on both days, and now we have an additional structure (this bulky metal red shelf, to be exact) and more room to display tomatoes.

Garlic is hanging in three different buildings on the farm. Fields that housed our peas and first lettuce plantings have given way to scallions, cilantro and mesclun lettuces.

Yesterday was my first step toward managing the Wednesday market at Union Square. Keith and my dad are painstakingly teaching me how to drive stick – Keith with the Mitsubishi market truck, and Glenn with his six-speed rollback. It’s fun and terrifying and exhilarating, and it’s hilarious to watch these nervous men beside me in the cab, but I think I’m learning quickly. At market the guys tried to step back and let me call more shots on stand layout and organizing, and loading and unloading the truck. It rained three times while we were down there and again while we were loading, so by the end of the day we were all pretty exhausted and ready to boogie. How did I do? We’ll see. But at least I learned a lot about what to do and not do for next week.

This one is a short one, just to get back into the groove of writing. My camera broke a couple weeks ago as well, so I can’t even photograph some of our awesomeness. But here’s a picture of me and Chelsea at our first and only girl market, kicking ass. 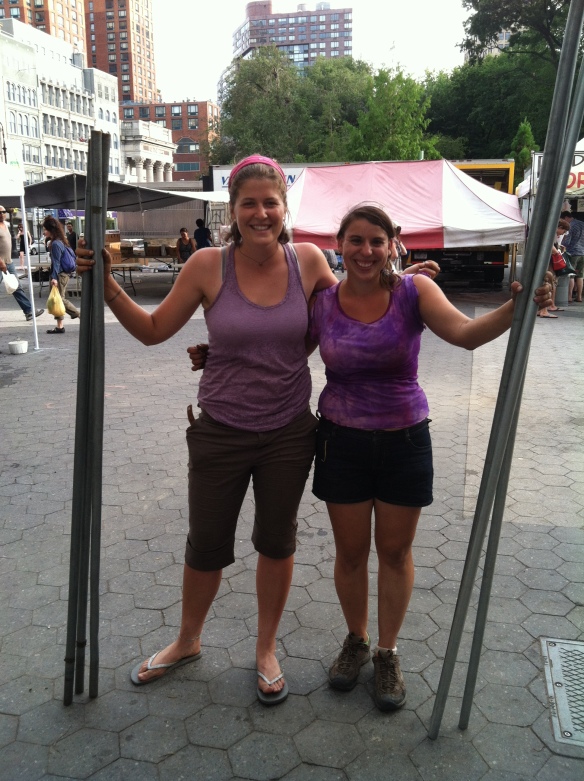