Once there were onions in my field below the greens. Allegedly they’re still there. My mom spent the hours while I was at market yesterday toiling through a row of them, hand weeding through the heat of the afternoon. She stood up to leave and claims she couldn’t tell what she had done. This is going to be a regular feeling for the next few weeks while we fight the good fight against the fast-growing yellow nut sedge (of course, the biggest patch is in the onion field), quickweed, pigweed and the abundance of broad leaf bastards that are trying to overshadow our transplants with all their might.

Other pests include: The tomato horn worm, that cool but sneaky looking punk who eats all my plants. EDIT: As the worst farmer ever, someone finally pointed out to me that I’m a fool, and this is one o’ dem parsley-eating catepillars that turns into a swallowtail butterfly. I have a tomato hornworm picture somewhere that I’ll actually put up when I find it.

2) Distracting farmers and their motorcycles who want to come do work for free…oh wait. That is the opposite of a pest.

And the war wages on. For the first time in my life I look forward to the fall, when a good frost will freeze the quickweed in its tracks, and I’ll awake to pick kales and fall brassicas amidst its brown, dead foliage. It’s the little things…

But the vegetables and the market (for me) are growing by leaps and bounds. This week mulberries, peas and my first handful of summer squash flew off the tables. A man came into the stand asking after sorrel for a recipe he’s been holding onto for months. When I showed him my bags of it he threw his arms out and embraced me in his excitement. It’s hard to describe the hilarity/satisfaction/excitement of these kinds of interactions, but it’s a rush for sure. 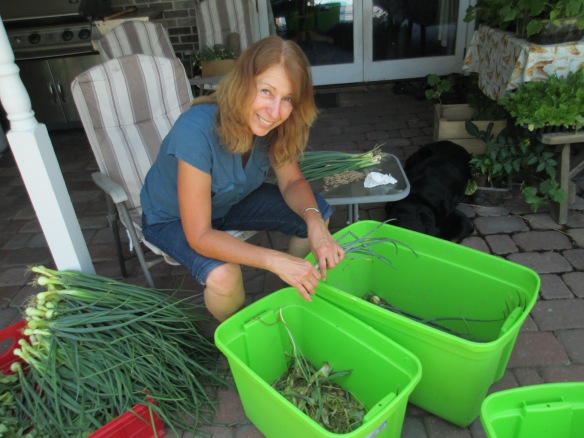 Radishes and spring onions getting pretty for market.

A radish wreath for all you watermelon radish fans 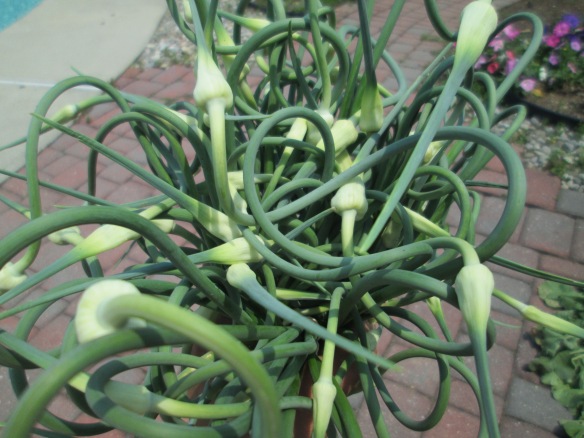 I still can’t convince folks that endive is the greens wave of the future, but I know we’ll get there (it’s all in the balsamic, I hear, to make this one edible and delicious. Or hot bacon dressing ,if you are of the PA Dutch persuasion – as my mother and her side of the family will swear by).

Everything is growing quickly except my tomatoes, which need irrigation. As you may recall from previous posts, I’ve been struggling with this from the start. The massive amounts of rain over the past few weeks worked for me up on the hill, but hurt some of my friends who had potatoes in standing water for days (as I did with some beans and the onions/weeds in the flat grounds). However, New Tripoli’s well-draining dirt means it’s time for more water, and I don’t have it just yet. Paper Bear Wagner took a generator up to the property to work with the well pump as we still don’t have electricity, and this afternoon we’re going to give it a whirl with the irrigation supplies I inherited from Keith and Tim. With the free drip lines, layflat and a prayer, we may have water. Which means we’ll have tomatoes! 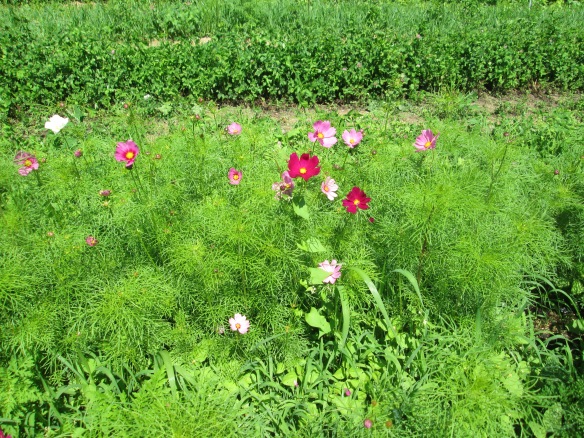 My chard is so pretty it looks like flowers.

Walking through the field is instantly calming. I’ve been ripping out tent ads from newspaper flyers, toying with the idea of overnighting up there for my mental health. I’ll pull the trigger on this soon, I expect, once I start sleeping again. Trying to juggle the farm work with a social life is working, but just barely, and involves a lot of late night adventures and early morning return trips. Which can mean slower pick days and planting days and weeding unless I morph into full-on Diesel Mode. Working on this. The store’s New Chapter ‘s Perfect Energy Multivitamin is carrying me through today (in a futile attempt to cut back on coffee).

But it’s an exciting time to play in the dirt. The calendula and cosmos and sunflowers are starting to bloom. The squash is growing big and beautiful . Mom and I are combating the Colorado Potato Beetles as best we can, trying to keep that beautiful potato foliage and flowers as pretty and healthy as possible.  Glenn and I did some fairly-unsafe tractor maneuvering to sort of hill those suckers, and I’ve dug up a couple – they look great. 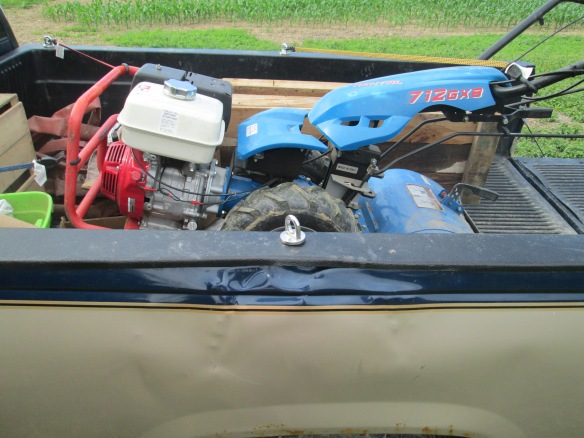 Took this bad boy for a spin last week. Sadly, it doesn’t work so well on my hills. Apparently the answer is a bigger one…

Oh, and come out to the market at South and Passyunk on Saturdays, 10-2. I’ve got raw cheese, artisan bread, duck and chicken eggs, heritage grain flour and ALL THE VEGETABLES YOU WILL EVER NEED. I got snap peas and squash this week. Nom nom nom.

4 thoughts on “Toiling and Growing – The June Edition”