There’s a billion things to do soon enough – but it’s just so hard to think about with all this snow all around. I sleep in my knee-high Carhartt socks and wake up after a major fight with the snooze on my phone to milk cows orrrrr rally to do things like run, sleep more, harass the dog, or try to write this blog post.

Sometimes I can feel like a slug, though I know won’t last for much longer. And it’s not like I’m being totally useless – this week was an over 40 hour work week. But that’s not every week, and it’s at strange hours that give me big gaps of downtime in the middle of the day for…well, slugging around.

But it’s also a time for adventure. California, as I mentioned previously, was great.

And everyone seems to traveling around. Keith’s Farm alums Jay and Laura of Peace and Carrots Farm (newly-minted in 2013!) have enjoyed their fair share of adventures, too. Jay is just back from a trip down South for some warmth, and is hoping to head back down again before the season starts. Laura has been out West and all around.

All the Keith’s folks have been keeping busy. Matt and Shannon moved down to North Carolina and into a sweet pad with a couple tillable acres.

They just picked up their hoop house from Virginia and are looking for some outlets for their upcoming vegetable operation. 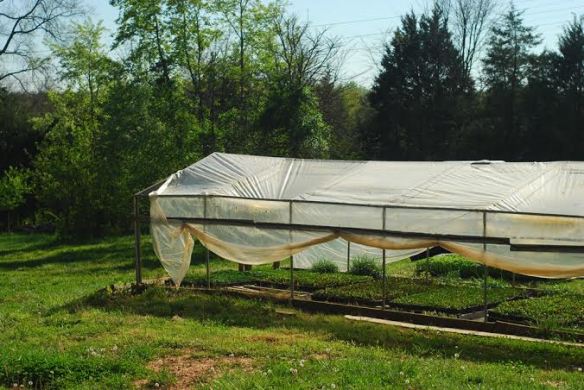 Once they put this back together, they’ll be rocking and rolling in the NC!

And…my boys. Derek and Matthew, of the Keith’s farm 2012 crew, are in Philly. Derek just got a job at a beloved bar in Gray’s Ferry, and Matthew is delivering cookies (which is an actual job – God Bless Philly). Allie is here now, too, and is keeping them in line and being awesome. I have already spent more time on their futons and fighting for Matthew’s blankets than I spent with anyone from June-October 2013.

Matthew is a goof and has learned a Mountain Goats cover. Best soul twin.

After a summer of exhaustion and isolation, I get to vagabond around Philadelphia with my favorite people. Olivia and I made breakfast for dinner and watched X-Men last weekend…twice! And then we slept in and make pancakes for breakfast. My friend Steve has instituted Archer Mondays, which is fantastic, and I a, painstakingly moving through Season II of The Wire with Mario (“How do you only watch one episode at a time?” Steve asked, and the answer is with all the willpower I can muster, or I’d sit on that couch next to the fire until Omar was robbing Marlo). It feels surreal to have time for TV again. My friend Stef invited us out to a Cheese Ball Fundraiser for Birchrun Hills Farm, and I took my boys down to meet my old college friends at a Science Club show.

And working has been a great distraction from this depressing weather. I’m learning more and more about dairy processes and cows and the history and culture of dairy in this area. I get to hang out with Andy, who is really cool. I’m learning more about herbs and alternative health at the other job. I get to hang out with Ed, who is hilarious and my other dad (he stares down guys who linger in the store to talk to me). My friend Gina is providing me with strengthening, positive guidance and a healthy dose of gal time. I’m finally, finally starting to take yoga classes again with Sharon Schnyder, who has been my favorite instructor since 2005.

And the farmer time has been absolutely vital. I had coffee with Teena Bailey of Red Cat Farm, and I’m looking forward to the PASA conference almost as much as my incoming UPS shipment of seeds from Fedco! I’m trying to get all my ducks in a row for this season, and having such invigorating, positive and knowledgeable folks around makes it so much more comforting and exciting. My awesone extension agent has some social farmer things on the horizon, and is going to help me with walk-in/washing station upgrades.

Oh, and the cooking. Now that I don’t have many vegetables left, I have time to cook (of course). But I get to eat Excelsior Farm eggs on the regular (that’s the dairy’s name, by the way, because they are awesome), my neighbor has been giving me some fresh milk from his Ayrshire, I still have a couple bags of Teena’s amazing flour in the fridge, and I do have some storage crops lingering on. There have been lots of egg and kale fritattas, vegetables soups and stews, and yesterday I strapped on the old baking apron and baked some Better-Than-Pumpkin Butternut Squash Pies with the handful of winter squash that didn’t get eaten by bugs. Big hit.

This pie was made from Crooked Row butternut squash, Excelsior farm eggs, Willow Haven Farm’s donated milk, Red Cat Farm’s local heritage grain flour, and spices from Health Habits, where I work. My farm friends are the best, no?

This has inspired me to get ahead of the game on produce recipes, too. I’m going to make a new tab on this blog to catalog some of the more successful recipes, including some that were passed around by my CSA members last year. Just thinking about them is making my mouth water.

And so I leave you with another shot of an adorable, hungry calf. And all the warmest wishes to get you through this snowy winter. We can do it! And to all you farm folks, enjoy the respite for as long as you can. I know I am.

2 thoughts on “What Do You Do In The Off Season?”