At 5:15 am this morning I was racing through South Philly, determined not to be late to my Back on My Feet run, when my father called. My blood ran cold when I saw his name lighting up my phone, and I steeled myself, already ramped up for potential hysteria as he told me someone was dead.

“Yo. Call your mother and get Dave the Farmer’s phone number. I need to know if the part of the field he didn’t plow is gonna erode into the pond if it rains.”

My end of the line is silent. So, no one is dead.

“I need to know if I should get some hay bales to put around for now, because if it runs into the pond I –WE’LL– get a fine.”

My father is unlike anyone else I have ever met. I took a class about Vikings (yes, Vikings – and it was an HONORS class) my senior year of college, and it was probably the closest I’ve ever come to understanding the man who I lived with for 18 years. 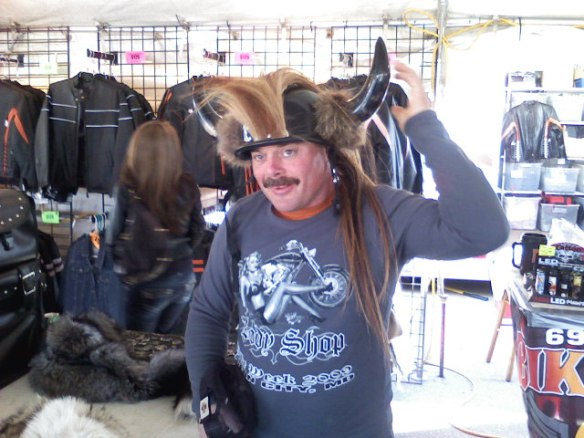 This picture may have actually inspired me to take that Vikings class. True story.

Glenn Wagner’s childhood, from what ex-cops and relatives have told me at parties over the years, was full of beating up jocks, sneaking off with motorcycles as a 13-year-old, and maybe or maybe not graduating high school. He rented a welder’s shop when he was 19 to start his own auto body shop, made enough to pay for the building, and to this day works in that shop. He married my mom, put us up comfortably and sent me and my sister off to college on days that start between 4-5am and end, on good nights, between 6-7pm. He still likes to ride motorcycles, go on physically challenging adventures (especially if he can bring Strider, our Rottweiler), work constantly when he’s on vacation, and avoid people whenever he can.

He is, if you haven’t gleaned this yet, the hardest working man I know.

So it stands to reason that I was nervous about telling him of my farm plans most of all. He did not warm to the idea right away – by which I mean, he wasn’t thrilled with the idea of me leaving a stable, paying job with health insurance and benefits and a slew of guaranteed incomes and protections, to go do something that I had essentially no knowledge of. He had a lot of questions, and a lot of cautionary stories – this is really hard work, it’s too hard to make money, how are you going to learn how? Tell me again why we sent you to college?

That all being said, within two days of sharing my intentions, my mom called me after work on night and I could hear him in the background directing her to give me Jeff Moyer’s phone number. Jeff is the farm director at the Rodale Institute, which is an institution that anyone with even a mild interest in green things should check out. He is apparently friends with my dad from way back, and is pretty amazing at what he does. And if Glenn’s kid was going to run off and become a farmer, she was going to need to talk to the best.

I applied to the institute’s Agriculture Supporting Communities intern position, but accepted a spot on Keith’s farm before I heard back. But I know now that Jeff is a phone call away when we have any questions, and I know my dad wouldn’t have put us in touch if he didn’t think I could do this, and do it well. Glenn has since talked to roughly a thousand farmers, figured out which rototiller piece I’ll need to buy to stuck on the back of his backhoe, and has expressed excitement at my departure from an office and, more importantly to him, the mysterious, crowded, loud, trafficked, unappealing city. From ages fourteen through twenty we struggled to speak to each other without screaming, and knowing almost definitively that we have turned that particular corner is worth all the career changes in the world.

My parents bought the farm in Lehigh County to retire to, but they have taken to the idea of us working together with more fervor than I could have ever hoped. I mean, if Glenn Wagner is thinking of buying hay bales so our two-acres don’t wash away on his way to work at five in the morning, he’s clearly on board. And I wouldn’t prefer to have anyone more than him in my corner.

I did call Dave, by the way. He got a kick out of my father’s early morning concerns, but assured us that the seventy yards of grass leading up to the pond will prevent that sort of washout, and as soon as weeds or red clover start growing in that patch, the soil will firm up. So we’re good to go, for now.

This morning as we hashed over Glenn’s pre-dawn projects, my mom said that she felt happier working on this farm stuff than she has in years. Her and my dad run the shop together – she knows small businesses inside and out, and she’s already excited about bailing at the office and coming to work , or at least to hang out and watch me work, in the field. And I have a feeling that Glenn will be right behind her, shovel in hand, probably revved up to tell me what I’m doing wrong, but really there to help his kid.

The sun has been rising steadily over South Philadelphia for the last hour or so, shifting the black outside into formless gray surfaces across our backyards. A grill, a concrete divider covered in matted green ivy, a fence slowly come into focus as 6:00 am approaches.

I have been lying here listening to the tenuous cries of feral cats, mounting birdsong and my own breath in the muggy morning air. A bean tree has created its crooked, stubborn life in the partial dirt alley behind our house, and starlings and, today, a wayward seagull have paused to give a call before moving east toward the water.

Ninety degrees in April? Unfathomable. How this uncanny weather is about to affect my future is anyone’s guess, at least right now. Lord knows I’ll have to start figuring all that out soon. But right now I’m not thinking about weather reports.

I am thinking about dirt.

Two weeks ago my family, Nate and I dug up thirteen shovels of dirt from a two-acre perimeter on the property in the Lehigh Valley. We carried it home, mixed it together and laid it on newspaper to dry overnight before shipping it off. Penn State will test it for phosphorus, arsenic, nitrates and a slew of chemical words whose boxes I checked without understanding the names. Soon we will have some guidance as to what is happening in that shale land that may become my home, and hopefully we’ll be able to figure out how to coax it to life.

I started visiting farms, reading books by farmers and articles about high tunnels and farmstands. I e-mailed the Food Trust for a farmer’s market application, knowing full well that we are probably years pursuing this issue further. I drove to New York to interview with Keith Stewart and his wife. Keith is known for his work and runs a well-established farm that he’s been tending since the 80s, and for the next six months I’ll be working for him along with a handful of other interns I’ll be meeting soon.

My success, failure and love of dirt at the end of all of this will determine my next move, which at this moment may include creating and operating a farm. My parents, who have always been amazingly willing and able to roll with the punches their daughters have thrown over the years, went from coolly skeptical to wildly interested over the past three months. This past week my father assembled nearly a dozen rain barrels and my mother attended her first Exploring the Small Farm Dream class at a Penn State extension office. The guest speaker talked about creating CSA shares for people in the SNAP food aid program and running classes and summer camps to teach kids the importance of sustainability, and I could hear the excitement in my chest reflected in my mom’s voice. For the first time, I started to believe we might pull this off.

Last June I joined Back on My Feet, a running group in the city that partners with homeless shelters instills a sense of self-worth and purpose through running. Three days a week I leave my house in the morning dark and run to meet my team at Broad and Bainbridge, where we run with guys from the Ready, Willing and Able shelter nearby. This team is what I will miss the most when I leave – I know that unequivocally. These guys have pushed me to try harder, to run faster, to dream bigger than I ever have before. Without them, I never would have realized how much I needed to shake up my post-grad existence, or that I want to be working and living and sweating outside instead of feeling my eyes give out behind a desk and a computer.

When I told them I was leaving, my guys immediately started to call me “Farmer Liz.” This blog and this journey are in honor of them and everyone in my world who has encouraged me to take this plunge (and to share it with them). I hope this undertaking will, at the very least, pleasantly distract you for a few minutes a day. Maybe you’ll start looking for some dirt of your own. Regardless, stay tuned. It’s sure to be an adventure.