After a riveting, busy and ultimately amazing Saturday market last week, Derek, Matthew, Chelsea and I went gallivanting out into the world Sunday and had an incredible farm adventure.

After running into Fred Merusi, my dear friend Sarah’s father, at a lovely, solo Liz brunch in Milford, Fred insisted I come see his farm stand over in New Jersey. I have been meaning to get there for some time for a number of other reasons – to visit Sarah, to see the highlanders, etc. – so I rallied my farm troops and we set off on our journey into Jersey.

This is how we learned about local farmers and their farm stands. Sure, I have seen the side of the road farm stands from time to time, but here there were three within five miles of each other. And we stopped to talk at each one.

The first stop led us to some giant carving and Cinderella pumpkins, and a fellow named Gene. Gene has another farm in Pennsylvania where he hires the Amish to work for him. His wife died a few years ago, and this property we stopped at had fallen a bit into decline. Gene grew and grows a number of trees and shrubs for landscaping, but with the economic downturn found himself without a clientele. He was selling his giant pumpkins to a farmer who sells in Union Square, and it seems like these odds and ends are how he supports himself these days. I asked him something about his high tunnels and he lamented that Chelsea and I weren’t around when he was doing serious farming, as we clearly know what we are talking about. He was a friendly, funny guy, and he insisted we take some of his tomatoes with him when we left.

We traveled further down the road, past a few attractions and finally came to Fred’s place. It’s a beautiful, spacious property with wood buildings scattered across it. I roused Fred from the Giants game and he came out and gave us a tour of his grounds. 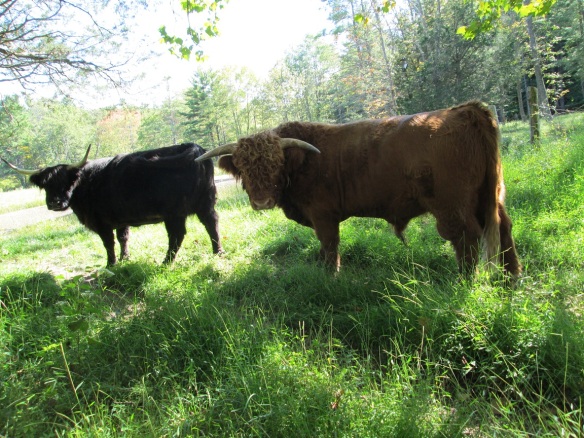 Oh boy, these Highlanders are BIG.

Fred, as you can see, has highlanders. Three of them – his bull, Mahoney, and two pregnant ladies. As our tour progressed, these three followed us around until they paused to take a dip in the pond that Fred dug years ago to the exact dimensions of a hockey rink for his kids. 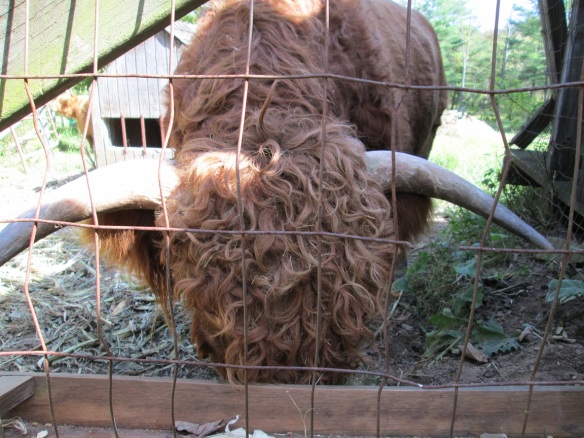 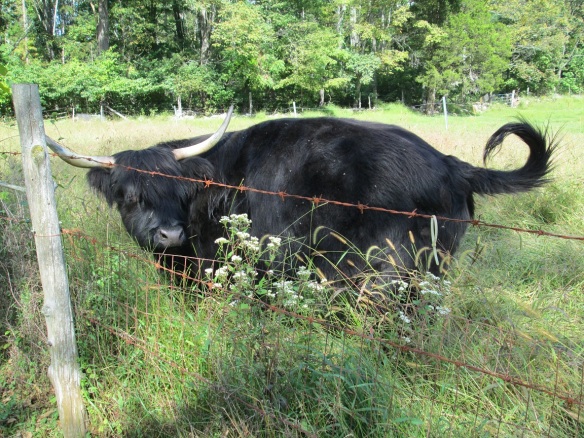 One of the mamas. 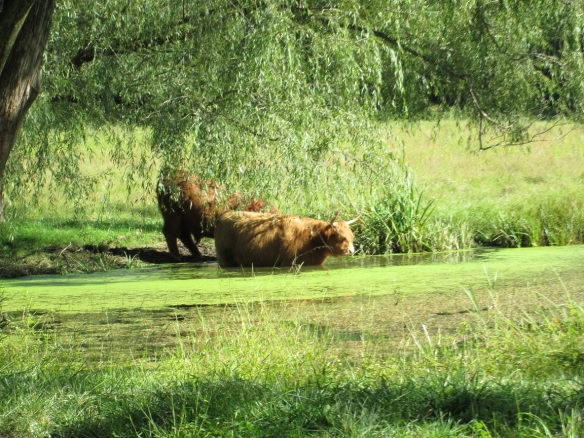 Fred’s got a sugar shack where he makes maple syrup in the winter, a garden patch for his pumpkins, a double-layer greenhouse and honey bees that a local bee guy cares for. It’s a beautiful place – the kind of place a person dream about having one day.

Fred shows us the grading scale for maple syrup. 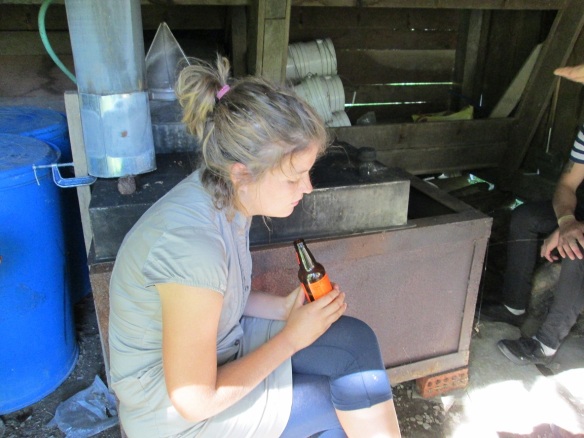 Chelsea hanging out in the Sugar Shack.

Derek hanging out in the Sugar Shack.

Matthew hanging out in a tree. Typical.

Fred shows us his garden space.

Though he can’t spend as much time working on farming as he’d like, he is hoping to soon.

Meanwhile, we soldier on.

This morning my uncle Butch arrived at Wagner Farmstead with a trailer full of pheasant manure that he, Glenn and I unloaded in the afternoon.

I am procrastinating on my field map (and with the blog, can you tell?), but I’ve been reading all sorts of things – Chicken magazines, classifieds for farm equipment and farm stand availabilities at area markets, and even a book called Compact Cabins with floor plans for teeny tiny cabins that one or two people can live in. Big idea scattered wide, because I like thinking about everything at once.

But I’ll start honing down into what’s important and start getting specific plans rolling soon. Promise. 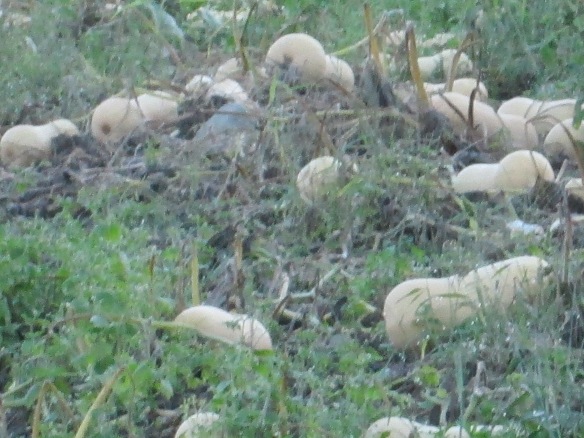 Fields of squash. These have since all been harvested. 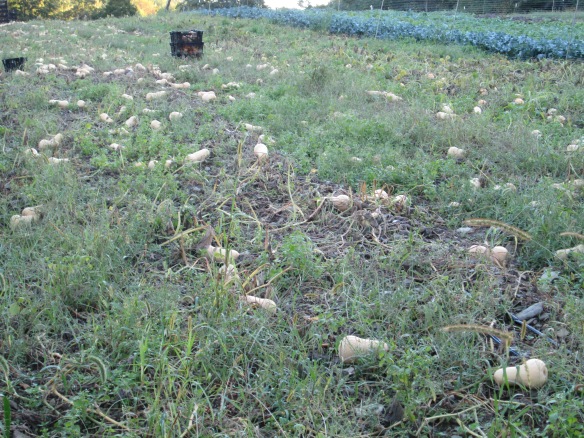 Fields of squash – these have since all been harvested. 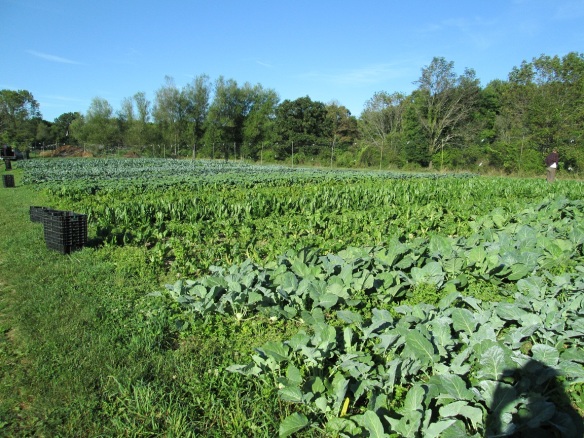 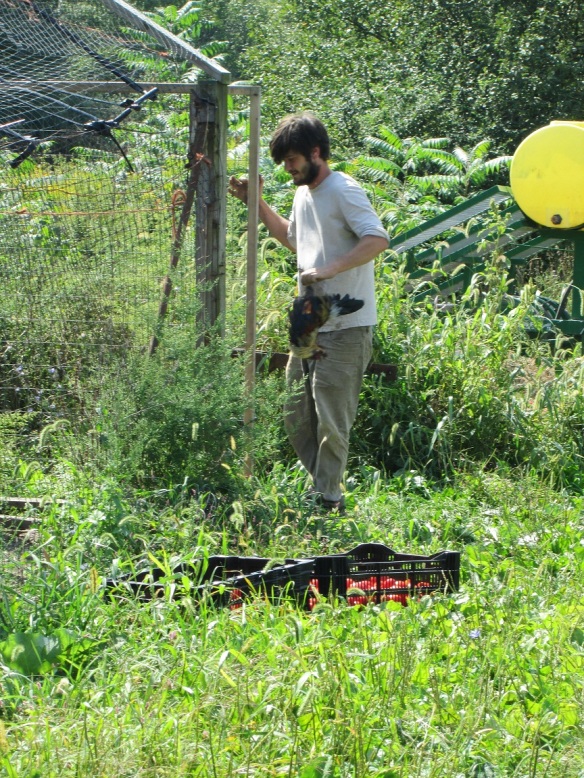 One side farm adventure – last week during a pick day our Bantam, who Derek and Matt have jointly named DiAngelo Barksdale (because he is wiley and often being beat up by the bigger rooster), flew the coop! He flew straight up through an opening in the roof of the chicken enclosure. He hung around on the roof and then jumped to the ground to contemplate his freedom briefly before Matt caught him and tossed him back inside. Otherwise, he would have been Kobe dinner.

2 thoughts on “Adventures in the Tri-State”