I started this post writing about our Sandy exploits, garlic planting and our now so, so frigid evenings, but yesterday there was a game changer.

I now own a tractor.

My parents, who have been nothing but excited and supportive through this entire venture, spent their day yesterday in Lebanon, PA at a Meyerstown tractor auction. The night before Glenn called to ask my spending limit, and Monday afternoon my mother rapid-fire texted me photos of the two tractors they were coming home with – a Case JZ 1100U for Glenn, because he likes machines with wheels that he can take down trees with, and because he wasn’t going to leave the day without a Dad-sized tractor because that is who he is, and an International 274, which is the perfect gal-sized, old-school, cultivating tractor for Wagner Farmstead. 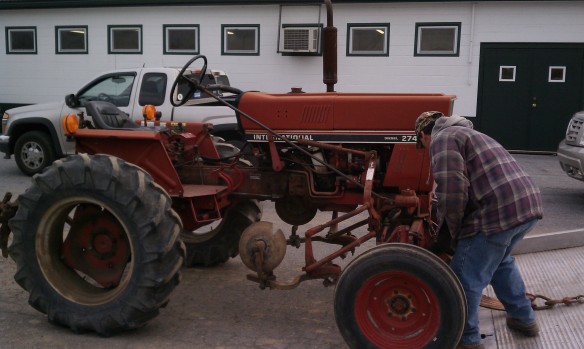 Isn’t she lovely? My mom sent me a flurry of pictures with the title “She’s coming home with us.” Because obviously the farm equipment on Wagner farms would also be female.

Look, I don’t know all that much about machines, not even tractors here, but here’s the specs I got: She’s got all sorts of equipment goodie hookups, a 3 Cylinder Nissan engine, she takes diesel (which, friends, means she could totally be converted to French Fry Oil in the future or some crazy awesome not gas product like that), has shanks for Front Cultivators, PTO (Power Take Off, which means the machine can power more than just itself, like a baler or a log splitter or other implement),  and so, so much more.

Glenn checking out my girl.

She is the definition of a sexy tractor.

These tine deals on the back will prevent soil compaction in my tractor paths. Booyah. 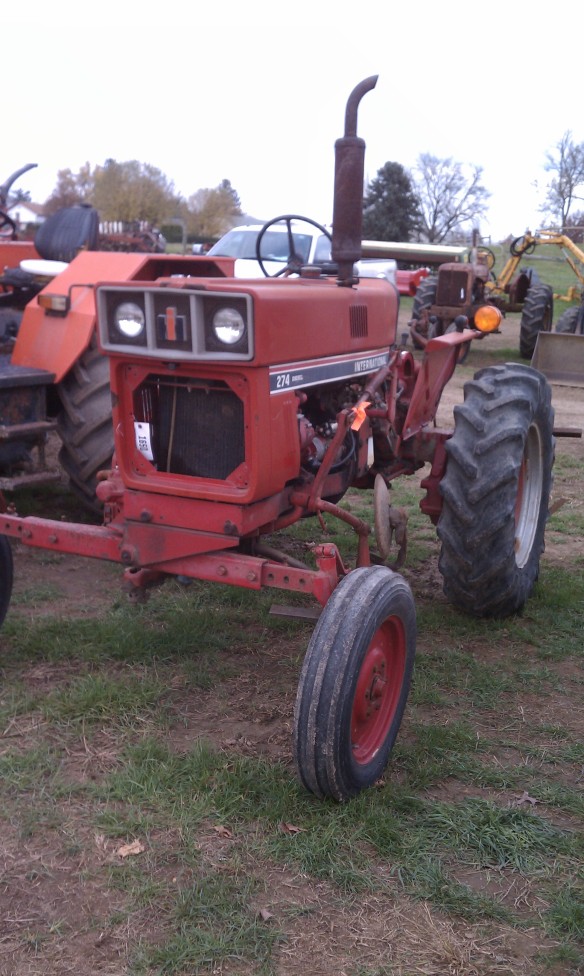 She needs a name, though. Any thoughts?

I cannot articulate how excited I am right at this moment. There’s been this warmth running through my body that I can’t shake. I am finally, for real, doing this.

Much like everyone else on the East Coast, Keith’s Farm braced for Sandy last week as well as we could. The boys who had off on Monday went and got some water and, most importantly, dark chocolate bars for me. We filled spackle buckets with water, stockpiled some batteries, hard boiled some eggs.

And then, at the end of the workday Monday, our power went down. What commenced thereafter were three days of chilly nights, food in coolers, and NO WEDNESDAY MARKET. Instead, we became foresters for two days, cutting down trees and clearing away some fallen ones near our front orchard. It felt great to work a bow saw for a few hours. On Tuesday we wandered off to John’s Chainsaws for a  new bar and some chains, and it was crazy to see how many people were in need of his services for downed trees – and what a town looks like without power. Even the grocery stores were closed in those first couple days in this area.

Jay, Chelsea and I sat in the dark one night and made cookie dough. It was an awesome moment during the Keith’s Farm 2012 Blackout.

And it’s not like we got hit like NYC, or even where my parents were in PA where they had no power until Friday, but wherever there are trees and storms, there will be complications. We did a lot of moving around by candle and flashlight, rationed our battery-powered computers, dug out our crank lights and radios and did a bit of homesteading as we hauled more water from the nearby creek. It was fun, but it was stressful and exhausting and cold as well, and we all cheered when the power kicked back on Thursday evening.

All the surrounding areas got power back before us, so we spent a lot of lunch breaks eating Westtown Pizza.

By which I mean, eating pizza and watching Cable TV, huzzah.

By which I really mean, being unwashed and dirty and eating pizza just to be in the warmth with people and TV.

Our biggest blow was our inability to hold a Wednesday market in the city. We harvested a bit on Monday, expecting the worst, but we couldn’t not go into Manhattan because there was no power in most of the area at that point, and Union Square had become an emergency staging area. Greenmarket was stressed out and desperately trying to accommodate the farmers, but it didn’t pan out by Wednesday. Who can blame them? Folks need their fresh veggies, but when the city is flooded with water and people are cold and powerless for days on end, it’s obvious that farmers markets could take a back seat to getting the town fixed.

By Friday Greenmarket had finagled the Satruday farmers some room at Madison Square park, and we packed a light load and prepared for our 24’x10′ spot in some random location – our tent normally being 24’x24′ on a Saturday, if you didn’t know. Clearly, there was some concern.

Derek and I had off on Saturday, so we decided to drive into the city and take stock of this new market and see what had happened in Manhattan while we were farmbound. Other than some serious lines for gas as we drove through New Jersey, we didn’t notice much out of the ordinary. And we were pleasantly surprised at the next-to-no traffic in Manhattan and the prime real estate (and free!) parking we landed a block from the market.

Here is one of those people gas lines they kept showing on the news – as we didn’t have the news this was a crazy sight to us. 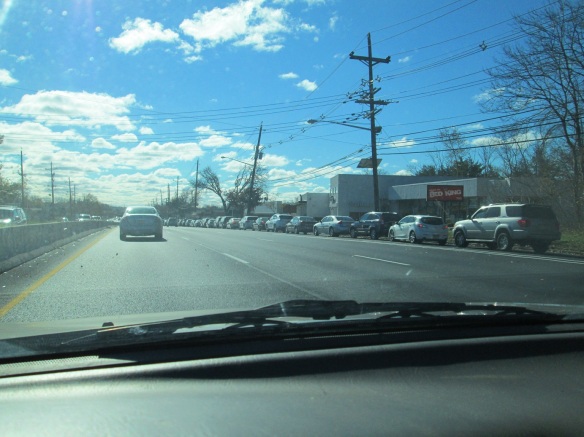 When we arrived at the new space, we were thrilled to see how cool our stand and the area looked. This park puts you right up on the sidewalk, and people noticed. In the brief time we visited the stand, I watched new fans ask Matt when we would be here again, and saw our elated regulars discover our relocated stand and beam with joy that we had come all the way down in this mess to bring them food. It certainly feels good to be appreciated.

The Saturday folks really rose to the challenge of a smaller stand and made a totally adorable display in the limited space. 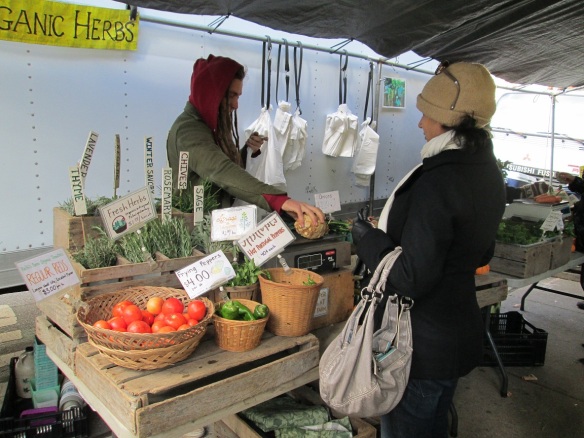 We will be at Madison Square Park again this Wednesday, which is exciting and a bit nerve-wracking as we aren’t sure what size space we’ll get until we get there. But keep your fingers crossed for us!

Yesterday we spent all day planting garlic. We are quite behind on this as it’s been so wet, but we’re steadily chugging along. We’ve planted somewhere in the vicinity of 40,000-50,000 cloves so far, which is about 2/3 of what need to be in the ground. What I’ve learned from this is how seriously the weather can jeopardize your livelihood – and it’s a lesson I won’t be forgetting anytime soon. I’ll give you all a more in-depth lesson on garlic planting later this week, when I am mourning Chelsea’s upcoming departure.

It’s 1am on Tuesday morning, and I’m hitting the sack once more. We spent part of the day yesterday covering greens in the field and garlic in the barn as the temperature plummeted to 19 degrees in the night – I am anxiously awaiting to see the state of our veggies come daybreak.

1 thought on “Sticking through Sandy…and It’s A Girl!”