That means less than a month left on Keith’s Farm.

I’ve been meaning to sit down and write for some time now. But instead I’ve been hanging out with the boys, sleeping 9-11 hours a day, and pretty much shutting myself down for winter. It was a little easier to ignore winter in the city – there is still so much to do and see, and small walks in the cold lead to your destinations. Philly was great this way. But winter in the country was what destroyed me as a kid, and I feel it creeping up to do so again now. 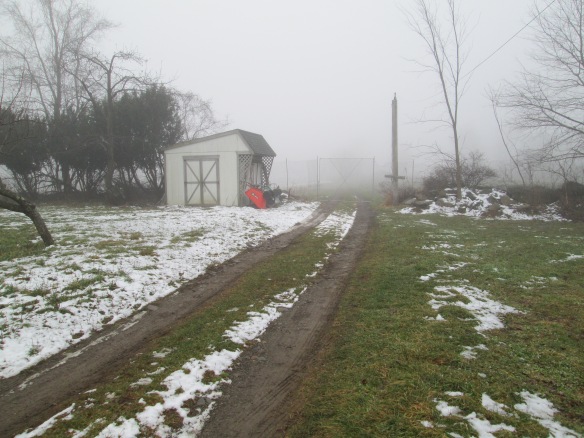 But there’s a lot of good things happening to combat these winter blues, too. Things are winding down on the farm – we took down one deer fence last week, and there isn’t much to collect in the way of greens anymore. We have a few tubs of braising mix, two and sometimes three of the hardier kales, waning tubs of mesclun, and collards. We are moving into a phase of just preparing storage crops for transit, which involves dumping them into coolers, loading the truck, and then throwing a small ceramic heater on the truck inside so everything doesn’t freeze. These are vegetables like winter squash, cabbage, carrots, the last of the celeriac and kohlrabi, potatoes and turnips. They live in the root cellar in the meantime. The days on the farm are so much slower and entail a lot less work, so now there is some time when those who are left here are hanging out in the last moments of daylight, and the rush from tomato season almost feels like a dream. 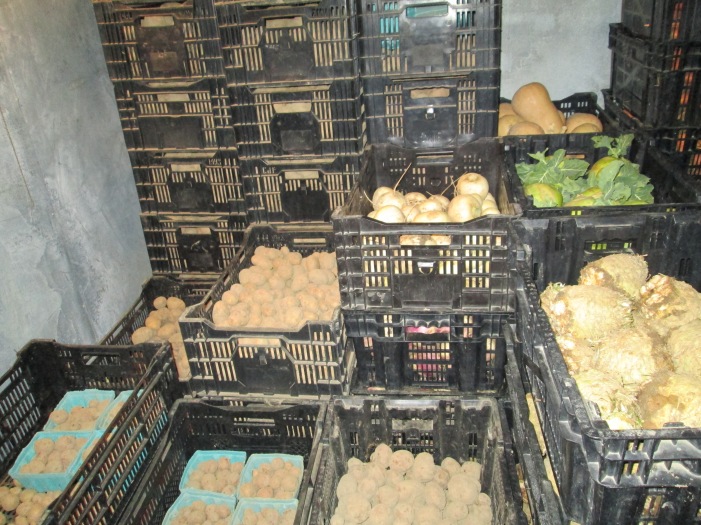 We store our crops in our root cellar. 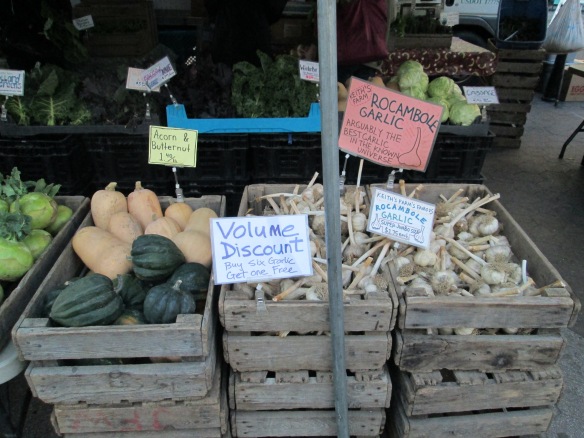 Roots crops – what remains of our produce. 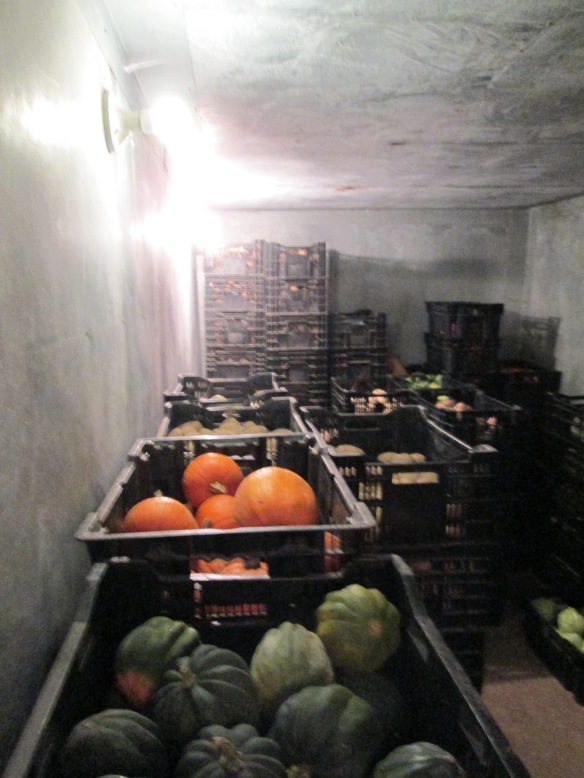 Veggie party in the root cellar! 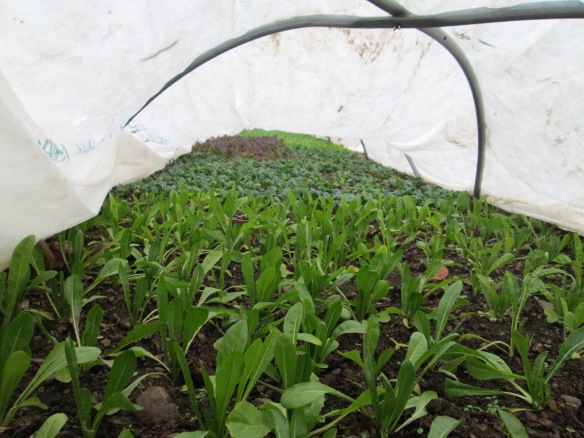 What remains of our mesclun is living under row cover in one of the high tunnels.

Chelsea has been gone for weeks. It is strange living somewhere without any other females – Flavia is around, but only sporadically because she spends a lot of time during the week teaching in the city. But Chelsea sent me an e-mail from Africa the other day, and it was nice to read of her new challenges in adjusting to a managerial office job, and to read that she has finally finished watching The Wire. Jay has been gone for over a week as well, though I’m sure he’ll be around a bit before I move home. Mateo left during Wednesday market last week – for where, I am not sure. And sometime soon Casey will be shoving off as well. So Matthew, Matt, Derek and I are the ones left for seemingly the end of the season. Matt has moved into Jay’s old room, and Derek is about to take over Mateo’s cabin. We are downsizing for winter. 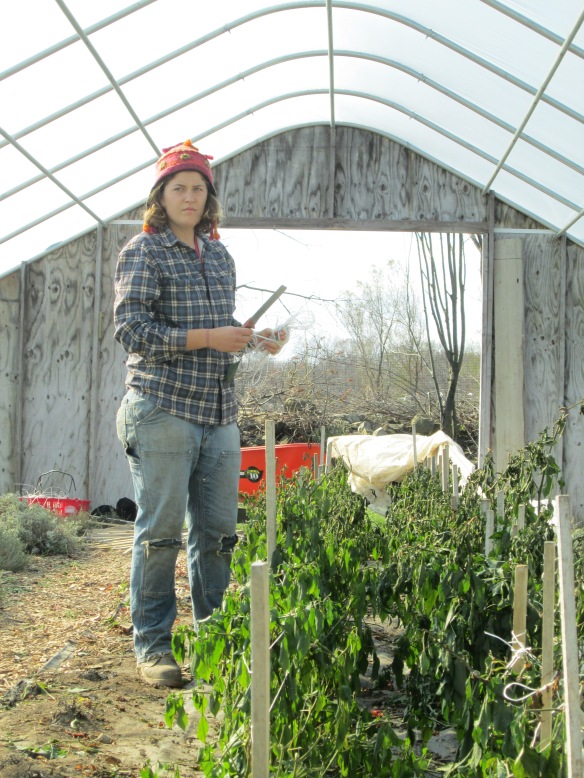 Miss Chelsea has moved on to save Africa. 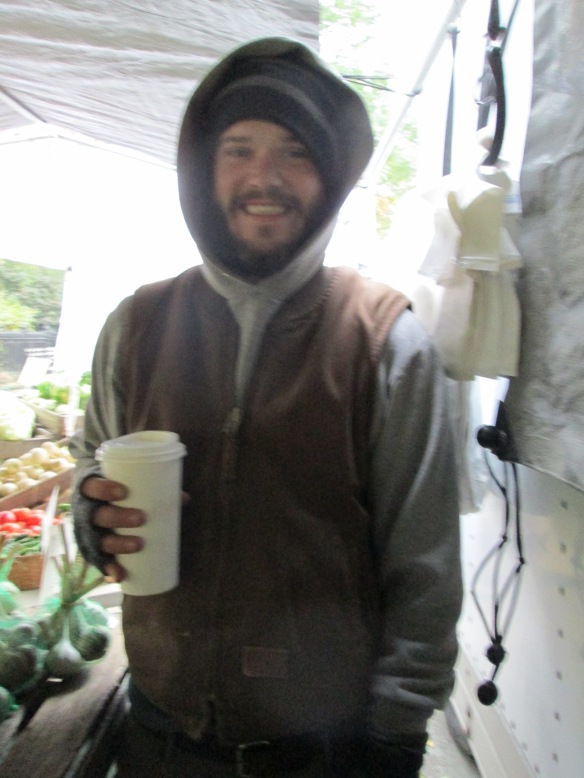 Mountain Man Ready moves to a warmer climate – the house.

Our surplus of garlic is on the brain, now. With potentially Keith’s biggest garlic harvest still hanging out in the house basement and the root cellar, we have a lot to process and clean. Matthew and the boys make beautiful braids (a skill I lack pretty severely), and we’ve been selling piles of net and burlap bags. We have been selling a lot with an incorporated volume discount since Thanksgiving, but there is still so much to account for. Matt has talked Keith into asking Greenmarket for a Monday market spot as well, and it seems we’ve snagged it. I think I’m going down tomorrow with a downsized tent and a ton of garlic to try at our luck. 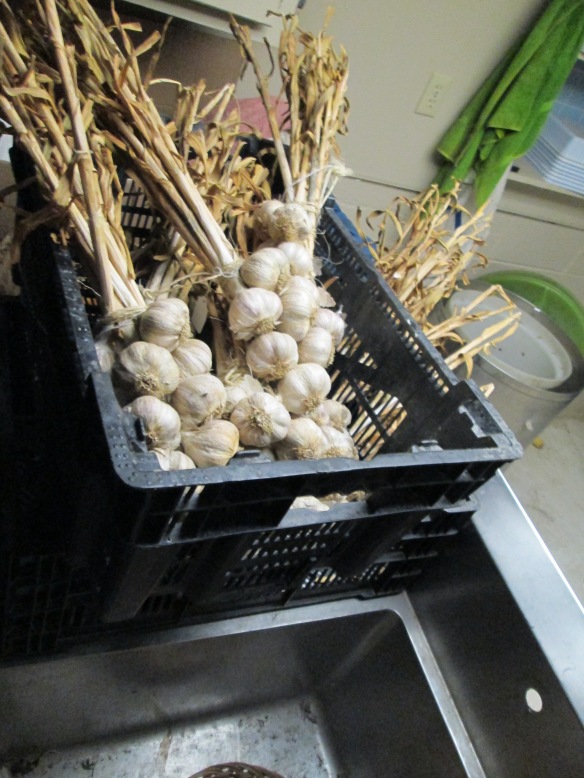 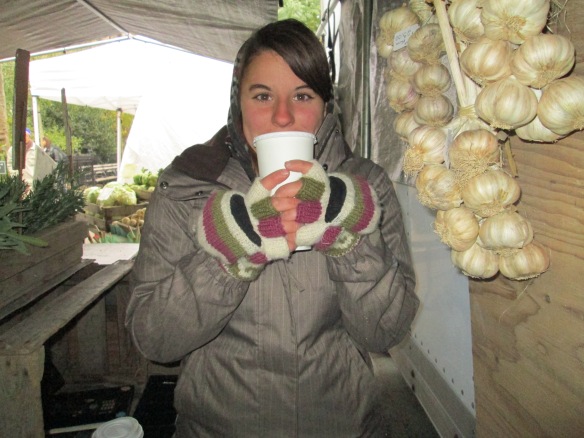 Me with my arch enemy, garlic braids. I’m just not good at making artsy things.

Another exciting point as far as winter on Keith’s farm – Christmas decorations! Matt and Derek made some beautiful herb wreaths for the Saturday market that almost all sold. We have metal frames, and attach bunches rosemary, thyme and garlic combos to create these gorgeous little wreaths. Yesterday I went out shopping in Warwick and came back to Matt’s morning adventure – he went out into the woods, collected a bunch of conifer limbs, and created some giant garlands to sell from spruce, yew, pine and fir trees growing around the property. 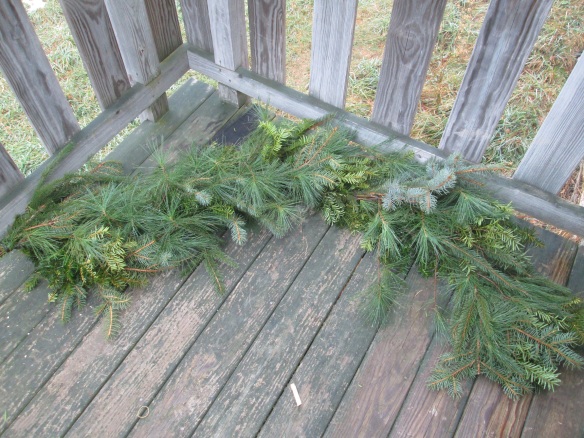 Very cool, right? And now at the end of each truck load we throw on half a dozen of Keith’s famous Christmas trees, wall trees and boughs – charming, Charlie Brown-esque litte numbers that  are sustainable because they are just tops and big limbs from his massive trees. We throw the trees on top of the coolers and lugs, throw on the hand bailer, and head off for our winter markets in the city. 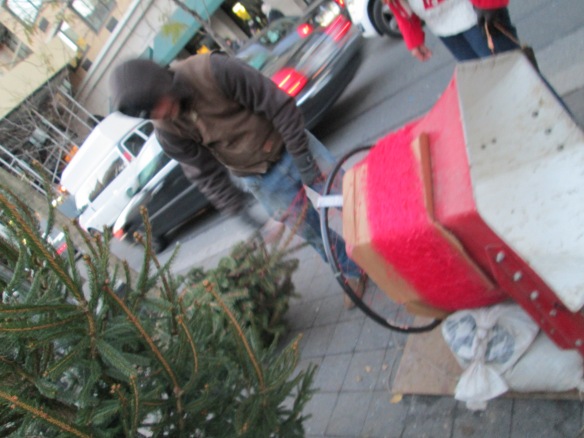 Bailing the first Christmas tree sold of the season. 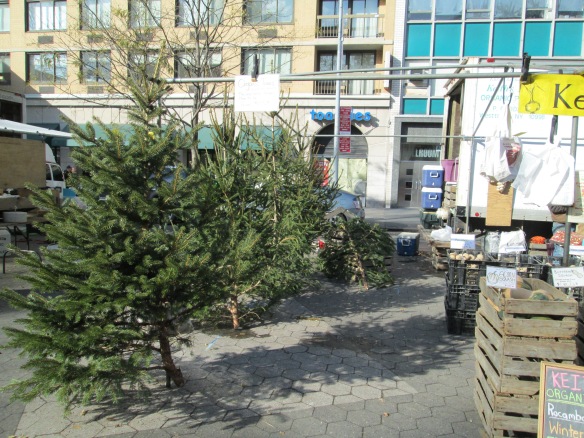 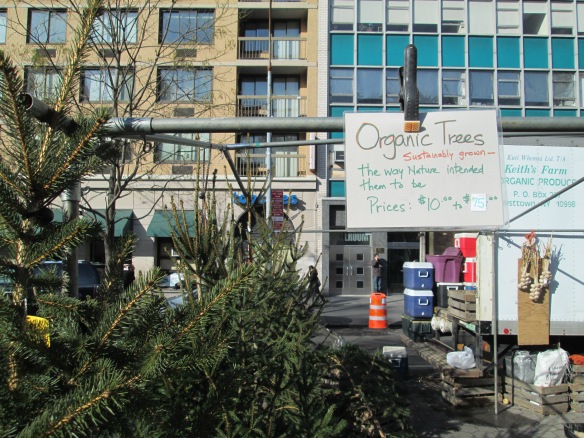 I am excited at the thought of going home after a relaxing afternoon in the spa from http://www.haircrazesalons.com/ and getting ready for the next big adventure – and to visit my sister, and see my friends, and just generally unwind and sit back and think about this whole eight month journey. I’ve learned a lot about farming and a lot about myself, but when you’re in the thick of it, it can be hard to sit back and process everything. I am excited, but I am scared and sad and pretty regularly overwhelmed. Last night Matt said that the hardest part of all this is having to think of everything at once – planning a field map and deciding what plants to grow and working out a planting schedule for all of it – and right now, as I lie in bed feeling achy from the cold, it’s all daunting.

But I’ve got a family who is geared up and ready to help. I’ve got an uncle who has been delivering pheasant manure to the farm, a dad who found the perfect tractor (though she’s still nameless), cousins who are curious, supportive and helpful, and a mom who is impatient to come be a mom farmer. I have friends who are excited for me to be back and who already want up on these vegetables, whatever they happen to be. I have co-workers to help me plan and help me out in a hundred little ways – they make me laugh and hug me when the cold is too cold, they tolerate my cartoon movies, they cook for me. We all want to make the most of the time we have left here. And despite the snow and the ice, I am looking forward to December. 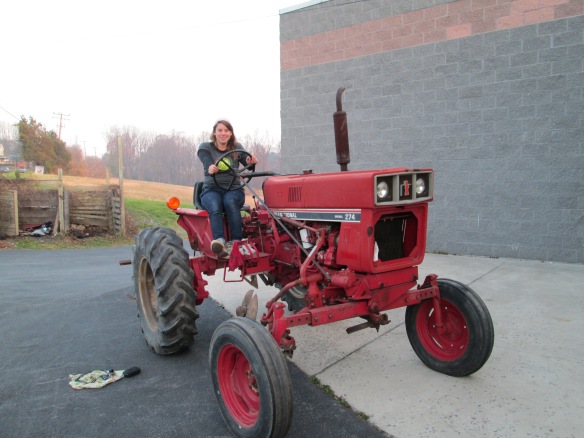 No, I don’t know how to drive this tractor yet. I’m just sitting on it.